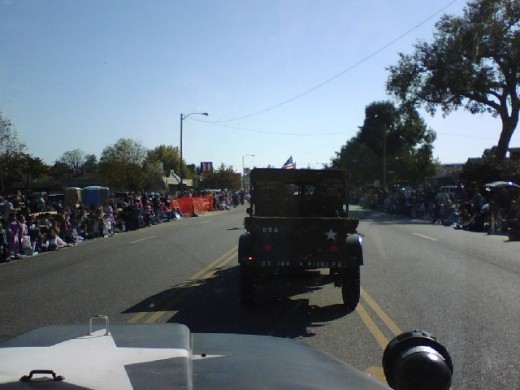 What a great day for a parade. We had a good time and the crowd was bigger than ever. There was Dave Billings and his GPW and trailer, Jim Lynne and his M38A1, Joe Rankin and his M38A1 and Jim Christy and his M37 and Gary and I just for the ride. We’ve never seen such a patriotic crowd. They all stood and clapped for us as we drove by and it made us feel good for representing our veterans.

Afterwards we settled at Billing’s Plumbing for eats. Thanks to Dave and Linda and crew.

In Loving Memory of Bob Warren 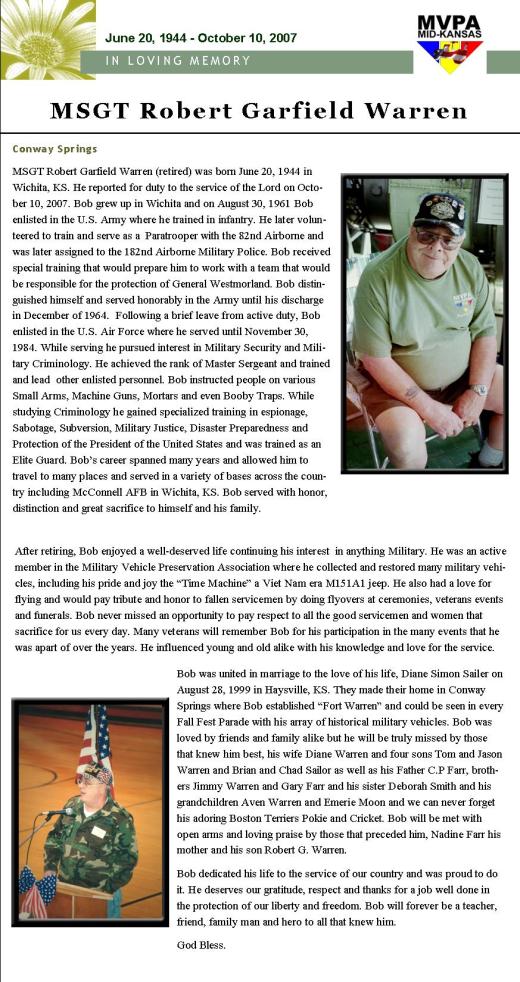 From Our Member from the North

Command Sergeant Major Lowell May will be the featured guest speaker at the Fifth Annual Re-enactment of an Interfaith Patriotic WWII Military Field Worship Service to be held Monday Nov 12th at 2:00 pm at the Cawker City Golf Course Park.

May will present information on the Cawker City Prisoner of War Camp which was located near the old Lincoln Park, just west of Cawker City, KS. May co-authored a book entitled Prisoners of War in Kansas, 1943-46 which was released in September 2007.

May has been a student of history for many years and developed an interest in the prisoner of war camps. He authored a book in 1995 entitled Camp Concordia: German POWs in the Midwest. In 1998 he was instrumental in founding the POW Camp Concordia Preservation Society and has served as its president.

May will have a limited number of autographed books on hand at the Nov 12th Field Worship Service east of Cawker City.

Other events that will be included in the afternoon service will be: Posting of the colors, Brenda Spangler singing The National Anthem, Soldier’s Prayer Written in 1793 presented by Kay Johnston, The Soldier’s Psalms 91 read by Joan Neifert, Interfaith Communion Service and Special Veteran’s Day Blessings, 21 Gun Salute, and Taps. The event will be followed by Free Coffee and Cookies.

Pastor Ross Olson reminds us that everyone is encouraged to attend this special service which will inform us about the Cawker City Prisoner of War Camp and Honor Our Veterans.

Next meeting to be discussed.

The Arkalala parade in Ark City will be on the 27th of October at 2:00 PM. The line-up will start at 11:30 AM. Hope there will be a good show of vehicles. If there are any questions please ask Dave Billings or me – Judy.

P.S. Please let us know how many of you are going to bring vehicles, so Dave can send in his form to the committee.

TIME: Doors open at 6:00 pm and the movie should start at 7:30 PM. Come early for pre-movie activity/program.

Admission: FREE with a requested donation to help fund our many programs. You must provide your own seating (bring your own chair).

Airplane Rides: World War II airplane rides will be available for sale or flying at a later date. These rides make great birthday, retirement or just for fun gifts. Temperature must be above 60 degrees and subject to weather conditions. Operation Officer must approve all flights.

Help us get the word out! Tell your friends and co-workers. Come as a group! PRINT THE FLYER!!

Contact hangarmovie@gmail.com to notify them how many will be in your party.

Mid-Kansas MVPA
Create a free website or blog at WordPress.com.